What is net metering?

Net metering (also known as net energy metering or NEM) is a solar incentive that allows you to store energy in the electric grid. When your solar panels produce more electricity than you need, that energy is sent to the grid in exchange for credits. Then, at night or other times when your solar panels are underproducing, you pull energy from the grid and use these credits to offset the costs of that energy.

While net metering is not the only way that utilities compensate homeowners for going solar, it is by far the most common: as of 2016, 41 states and Washington D.C. have mandatory net metering rules, and two more have utilities that permit the practice. To find out the policies in your state, use the Database of State Incentives for Renewables and Efficiency (DSIRE®), which tracks net metering and other policies.

“Net metering can give you a new monthly paycheck”
Fact or Fiction?

With net metering, you can receive utility bill credits for the electricity that your solar panels produce. However, you won’t receive a cash payment from your utility for your excess solar electricity, no matter how much you generate. If you do generate more electricity than you use in a year, utilities in some states will let you carry credits over into future years, while others will reduce your credits.

In general, most homes will produce excess electricity in the summer months and will use more electricity from the grid in the winter. Because these variations in production are fairly predictable, your utility won’t send you a monthly check when you produce more than you need. Instead, you will build up extra credits during the summer months so that you can draw from them at night and during the winter months when you need them. With the right design, your system can generate enough power to match your total electricity use for a year.

With net metering, excess electricity is fed into your electric utility’s grid when your system is producing more than you need. When this happens, your meter actually runs in reverse. When your system isn’t producing enough electricity, you can draw it from your utility just as you did before you went solar. This “back-and-forth” between your system and the grid ensures that your excess production will still be used and your shortages will be met. With net metering, the excess electricity your home produces covers the times when you don’t produce enough. 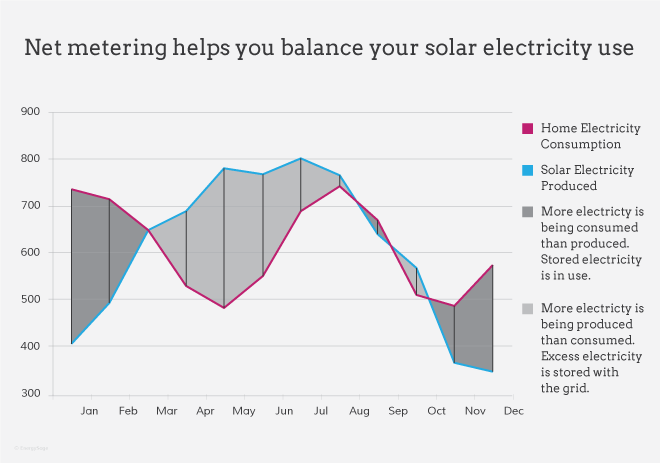 What about going off the grid?

In essence, net metering is like having the grid serve as a giant solar battery. If you install an energy storage system to take your home “off the grid,” you won’t have access to the benefits of net metering. In most cases, staying connected to the electric grid is your best option – while home solar battery systems can account for hour-by-hour variations in solar electricity generation, they aren’t large enough to provide the seasonal “smoothing” benefits of net metering.

With net metering, you can save by going solar

Thanks to net metering, homeowners are credited for the energy that their solar panels generate at the same rate that they would pay to their utility. As a result, you can save tens of thousands of dollars on electricity costs over the lifetime of your solar energy system. Calculate your solar savings to get an instant estimate of just how much you can save with a solar energy system.

Peak Hours and Off Peak Hours- How to Conserve Energy?

Peak hours reflect the highest demanding hours for electricity and range from 5 PM to 11 PM. On the other hand, the...

Clean VS Dirty Panels – How to achieve optimal production?

How to make money with solar energy solutions?

Pakistan is rising like the rest of the world in technological advancements. Solar energy has subsequently gained...